The tuned mass damper (TMD) or auxiliary mass damper, is a device consisting of a mass attached to a building or structure in such a way that it will vibrate at the same frequency as the structure, but with a phase shift. The mass is attached to the structure by a spring-dashpot system and energy is dissipated by the dashpot as relative motion develops between the mass and the structure.¹

Steel stacks are prone to move in a crosswind manner due to vortex shedding. Since steel stacks have very low inherent dampening, this movement is not easily stopped. Tuned Mass Dampers (TMDs) are passive, secondary vibration systems designed to increase the structural dampening of the primary system. Damping devices are attached to a chimney to increase its structural damping, thereby significantly reducing the cross-wind and along-wind vibrations, including the effects of aerodynamic interference by other nearby towers or chimneys.² The American Society of Mechanical Engineers Steel Stack Standard STS-1 prescribes the conditions under which vibration control such as a TMD is required. Fox Equipment offers Tuned Mass Dampers meeting the requirements of ASME STS-1 and CICIND Model Code for Steel Chimneys. 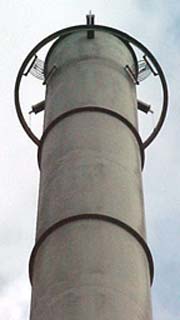